Participating in Klovn means putting oneself at stake, but on the other hand it is possible to win the sympathy that self-irony awakens in the viewer. The show builds its comedy around quiet everyday situations, social awkwardness, uncomfortable silences,it can simultaneously maintain and disregard the moral parameters of real life.
Casual racism, AIDs. Political refugees. Drug overdoses. The handicapped. Sexual harassment. Abortion. Exaggerations and lies abound, and doubts can be raised whether the real-life celebrities are equally as deceitful, but there will never be serious ethical consequences.

“When people think too highly of themselves, and their bubble gets punctured and collapses – that is always funny.” – Casper

The show is also held in a pseudo-realistic style, where a first-time viewer might be in doubt of whether or not the show is staged. The freshness that expresses thanks to the nature of the handycam throughout the series is interrupted in any way from the 5th season, rhythm and spontaneity is interrupted for more predictable narrative and assembly of more conventional film.

We are all familiar with the invisible line that cannot be crossed in proper and polite society – things that should be left unsaid and behaviour that goes beyond what is acceptable.

“Yeah, and we believe 100 percent that you have to address everything in this world – to make it easier for people with that kind of problem to live their lives. If you don’t talk about it, they become isolated and feel outside of the community.” – Frank

Frank Hvam. born in Viborg in 1970 is a Danish stand-up-comedian. After studying veterinary medicine for 3 and a half years, he dropped out to try his luck as a comedian. He has a bad tendency to get into trouble. He often ends up in absurd situations together with his best friend, Casper.

He is known for his performance as the “geek” Kenny Nickelman in the Danish sitcom Langt fra Las Vegas and as a writer and performer in the Pythonesque comedy Casper og Mandrilaftalen. This last collaboration was the beginning of a writing partnership that has yielded a number of comedy productions, including a Danish version of the British Shooting Stars and six seasons of Klovn.

Casper Christensen. born in 1968 in Kerteminde is a Danish comedian and Casper is Frank’s best friend. A ridiculous character with an unnecessarily arrogant, classist and unbalanced behavior. He is rather ruthless and extremely promiscuous, constantly cheating on his girlfriend Iben. Frank often has to clean up the mess Casper makes and constantly takes the blame for him.One of Casper Christensen’s characteristics was wear often big glasses, whacky hairstyle, and an abstract clothing style. Christensen was also well known for his energetic appearance on screen.

He started his TV-career in the Danish children’s show Hvaffor en Hånd? (Which Hand?) in 1991 but is also well known for hosting the very successful radio program Tæskeholdet (The Whack Pack). He has hosted many shows including Casper & Mandrilaftalen, the Danish airing of Shooting Stars and Don’t Forget Your Toothbrush (Husk lige tandbørsten), and the Danish version of Deal or No Deal. He also had a leading role in the Danish sit-coms Langt fra Las Vegas (Far Away from Las Vegas).

On 2007, Casper returned to radio with the programme Kongen af Danmark (The King of Denmark) but quickly left TV2 Radio and began writing on the 5th and 6th season of Klovn with his long-time colleague Frank Hvam.

Mia Lyhne. Mia is Frank’s girlfriend throughout the entire series. She runs a tea shop together with a friend, Susan and is often dragged into the mischief that Frank and Casper make. 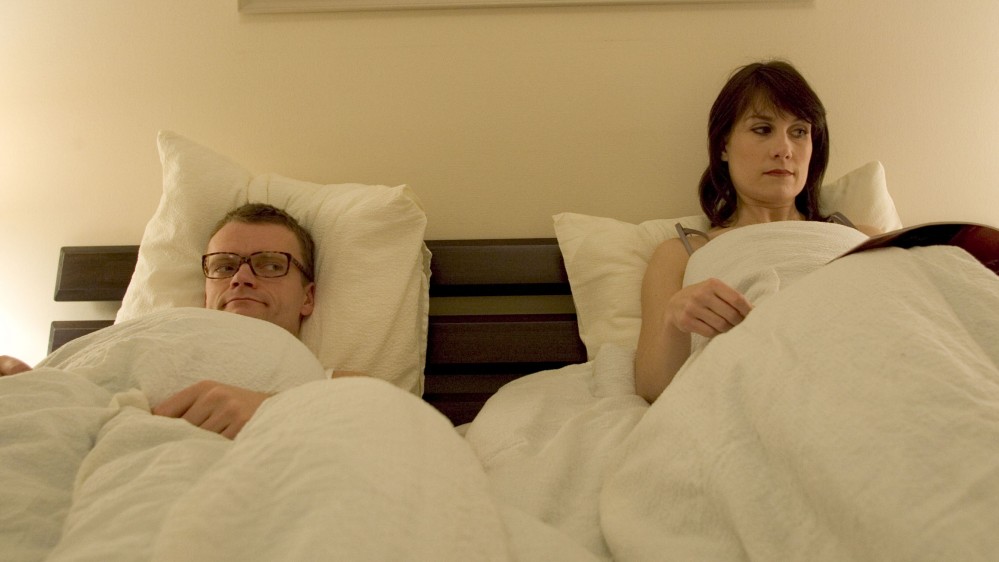 The relationship with Mia becomes incomprehensible sometimes, their continuous and absurd deception makes them reach the limit of the relationship . But she, showing unlimited patience and understanding tries to make the best of every conflict.

Iben Hjejle. Iben is Caspers on and off girlfriend and Mia’s best friend. At times she seems oblivious to Casper’s adultery, seemingly focusing more on her own acting career.

There are other characters as the friend and Fellow of the sit-coms Langt fra Las Vegas (Far Away from Las Vegas). Lars, a depraved man with a tendency to sexual harassment.

Claire, is a sensual British-born secretary participating in the first three seasons, causes language mistakes Often That Annoys Casper. with which the two characters are able to demonstrate its seedier side.

Jacob Weble “The Gimp”, an innocent, faithful and affectionate character. A being who despises Casper because it is concerned that with his honesty and ingenuity can proclaim their next adventures known as the nosy girlfriend Bodil.

Frank and Casper are a special couple. In fact from the point of view of Frank we could apply it to a love triangle including Mia. Frank in Casper personal characteristics that complement him, male behavior that prejudices and introversion would never have dared to explore alone. Instead, Mia, is your support stick, the angel who guides you in life was a road safety and consistency.

Frank is a childish, capricious and naive subject. Sometimes clever, but most often betrayed by a shallow arrogance, which with its ingenuity contradicts. For this reason, Frank Casper in his victim and perfect confidant, who share all their selfish actions and boast. Frank finds this approach as a way to experience that kind of life. In the lights and shadows in which it has always been, from the beer club until the time of deep depression and self-centered clinical internment of Casper.

He is perfectly happy being a younger, always behind the charisma that characterizes Casper achieving benefit. But sometimes he dares to require more prominent role and interest in society, but always frustrating because you do not exercise and constantly applies empathy in their environment.

“There is also a time dimension to it. Maybe we were more similar when we met. Maybe – not really, we were also very different back then.” – Frank

In 2010 was released Klovn: The Movie, the first film after the success of the series for 6 seasons. In the 90 minutes that the film we see as attempts to resolve some issues previously exposed in the series as; Frank maturity, commitment in the relationship with Mia, her fertility … and other issues of their environment as the bizarre relationship between Casper and Iben, his political family, etc.

Klovn The Movie was a light summer comedy about fatherhood, but Klovn  – Forever has a distinctively darker and more serious feel to it, featuring themes of betrayal and a breakdown in their hitherto unwavering friendship.

“Before we did Klovn, I was very well-liked in this country – I was in fact voted the most wonderful man in Denmark at one point. Then we did Klovn and everything started going downhill. I might be more famous and more popular, but people fucking hate me.” – Casper

2015 is the year of reunion with Klovn these characters in this film is when the two types of relationships that Frank has built throughout his life shows more clearly. A ratio of total complicity, trust and understanding with Mia and another contrast to this earlier, being a totally superficial friendship, based on a society of “shallow friendship” and completely unstable. These two are mixed together to make a cocktail that will bring the characters to reach a new dark limits, which added to their complex relationships succeed in hurting irreversibly.

“Then again, we did it to ourselves. Mostly people like the series and the movie, and to be honest, I am a fucking asshole and Frank is just so weird.” – Casper

Whereas the first Klovn movie followed Frank on a personal journey on his way to becoming a more or less responsible father, this sequel takes frienship as its core theme and explores just how far it can be taken, before the line snaps. As it turns out, the boundaries are near-limitless for these two, as they end up in one fucked up situation after the other

“Forgiveness is the right path.” – Casper

My final conclusion is admiration, admiration to know to taunt our perfect western setting, which we think we are superior to everyone including our nearest neighbor. An empty reality full of conventionalities that takes us away from our true path in life and causes us to act in a way that does not correspond to our being. It’s a real slap of reality that reflects us in this “clown” ourselves on more than one occasion.

This site uses Akismet to reduce spam. Learn how your comment data is processed.